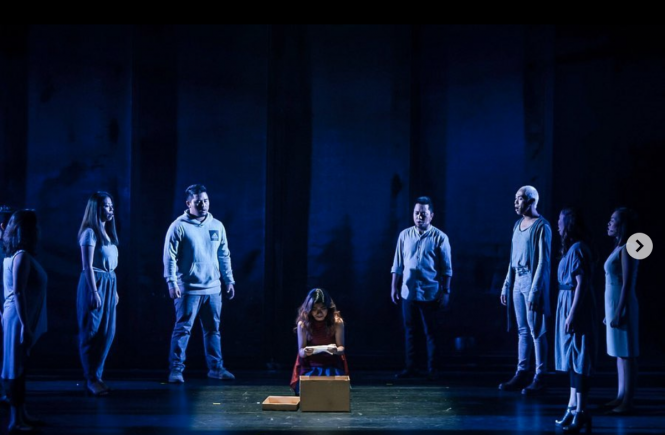 What can I say about Monsters The Musical? Well, since I’m at a complete loss for words, allow me to borrow my friend, Alem Garcia’s words- “the show in one word was FLAWLESS.”

As we all know, Monsters The Musical is a musical play about being brave. With hints of it having an #LGBTQIA centered synopsis where of course, #LoveWins, my ignorant self thought that it would simply just be about that and nothing more but believe me, it was more than “just that”. And then some.

This modern love story which was beautifully written and directed by THE Sir Jude Gitamondoc cleverly uses our ever loved and cherished Cebuano talent, Cattski‘s, music to add an unexpected twist and new light to her songs that we 90’s kids grew up with.

If you need a refresher to her music- catch it here. If you haven’t heard her music yet, you can thank me later.

With an amazing cast that added so much life and character to the story and songs, Monsters The Musical was familiar; it was our kind of funny; it was heart warming and more importantly, it felt like home.

But I would have to say the star of the night was definitely Jacky Chang. As a seasoned singer, I always knew she could sing but it was her acting skills that blew me away. Her portrayal of Bea, a strong willed yet troubled woman, is what truly captivated the crowd together with her magnetic chemistry with co-star, Trixie Alturas, whose acting also really captured our hearts. Trixie’s powerful vocals and amazing stage presence has me eager to see more of her in the upcoming months and years to come.

Of course, Marlon Tansengco and Von Saw‘s performances did not go unnoticed. They were all very, very good actors and I truly wish I could go into detail about their characters and why I love them so much without going too much into too much detail and robbing you of the experience of learning the story so I will just have to leave it at that. for now?

Overall, Monsters The Musical is a beautiful production with so many components that made it great. The acoustics were top notch, lights & technicals world class (hi Justin! I’m a fan!), the set design was straight to the point & no frills and while there were a couple mic issues, they were surprisingly resolved quite smoothly.

Monsters The Musical may be positioned, somewhat, as a modern love story but I still feel like it is a very classic love story (in it’s own ways). It talks about love between friends, family, one’s self, facing our most inner demons, being brave and honestly, I can’t imagine anyone who couldn’t relate to it.

I had an amazing time watching Monsters The Musical, I laughed; I cried; I pondered on my life and how precious yet fleeting every moment is and I feel like I came out of it a better person and for this experience, I am truly grateful.

As I end this review, I would like to commend the Cebuano theater community and supporters for our unwavering support for the arts. The Center Stage of SM Seaside was packed and every one in the audience was so amazing & behaved- not that I am surprised but I would still really like to congratulate us, as well. Cebu is ready for more productions like this and I am looking forward to us taking on bigger projects and taking our talents to a wider audience.

Congratulations to MDF Productions for a more than successful first production, Sir Jude Gitamondoc, Cattski, all the cast and crew.

I am looking for more runs! I also think that Jake’s character could get his own spin off. hahaha.