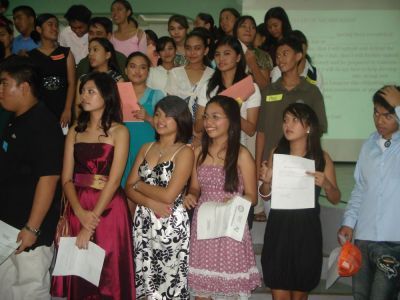 i took some time off to answer a relationship survey [and i tried to be very honest, too!] and here it is.

1) Single, Taken, or Flirty?
– i’m finally TAKEN and does NOT flirt.

4) Have you ever had your heart broken?
– yes, i have and that sucked ass.

5) Under any circumstance is cheating ok?
– hell no. never never NEVER

6) would you ever take someone back if they cheated on you?
– no. cause you only get one chance with me and you mess it up and that’s all you get.
edit: no, it would only be ayt if he had to do it or it’d be the end of the world.
aside from that, i don’t care i won’t take it!

7) Have you talked about marriage with another person?
– yes, i have.

8) Do you want children?
– yeah. and a big house and a hummer and animals and… so many other things. 🙂

10) Would you consider adoption?
– yes, i would. but it would never be the same to actually bearing your own child. no matter what folks say. lol.

13) Do you want someone you cant have?
– no. i have exactly everything i could ever want and/or need <33

16) Do you believe that you can change for someone?
– no. i only believe that a person can only TRULY change if THEY want to because they know that they HAVE to and not because someone wants them to change.

17) Do you have feelings for someone that isn’t your boyfriend/girlfriend?
– yes. but they are all strictly philial. i love my boyfriend, thankyouverymuch! <3

18) Ever wished you could have someone but you couldn’t?
– yes, i have. and i’m glad i never got him.

20) What would you say about your most recent ex?
– i don’t have any ex’s THANKYOUVERYMUCH.

interesting enough for you?

ok so here’s a little something i’ve been planning on writing for a while but only had the time to make now. i think this
is true in many aspects but i could also be very wrong. lol. but this is what i’ve learned [a few ra nuon] based on the 3 months that i’ve spent with james. lol.

just a though before all of this, though. bitaw james, what do we tell people when they ask us? and how come we never really tell people we’re together? i mean, on my side, i’m not afraid to tell people that i’m with you. i’m actually kinda proud  bout it. i just don’t tell them i’m with you when they ask me in front of you though because usually you just say, mu or something other than me actually being your girlfriend. and plus, idk. the term boyfriend sounds soo surreal to me. and plus, we’re not officially together paman gyud so it’s not like i’m denying him, right?

things i’ve learned about james/ being with guys/ girls and guys/ guys in general (in case you can relate):1. guys aren’t scared to talk about marriage and the future.2. guys smell better than girls do. i swear.3. guys are vain and obsess about their hair.4. sometimes being one of the guys is ok. :]5. guys have the tendency of calling their girlfriends “bai”, “doh” [guy nicknames] and then try to take them back because they think we mind but i don’t. i think it’s cute.    -> cuz let’s be honest, there ARE some things we don’t tell our boyfriends and vice versa. so when he calls me bai, i feel like his guy friend and i feel like he’s telling me everything. or stuff a guy usually wouldn’t tell a girl 6. guys are dramatic and over protective [when it’s supposed to be the other way around!]7. guys are sweet when they want to be8. guys aren’t afraid to show affection in public [well, in the right amount, of course.]9. guys care about their face, too!10. guys care about their weight!!11. guys will never NOT talk about other girls. and girls will NEVER STOP talking about other guys.    – but honestly, it’s ok cuz cute guys are just good to look at but i would never replace them for what i have now. and i can only hope he feels the same.12. guys ALSO have the need to shop.13. guys will always feel intimidated by other guys [even the weird fugly ones you would NEVER go for]14. or it just makes them feel like their protecting us.15. guys like it when we cuddle with them16. james gives the BEST hugs17. some guys actually do want what most girls want, too. [shocking, but true!]18. guys like manicures and pedicures, too! [which btw, is soo super gay. hahaha]19. girls take some things too seriously and expect too much which makes them look really needy.    girls, when  you’re with your boyfriend in front of other people, there’s no need to stick your “i-own-him” signs on his forehead. sometimes girls can be soo desperate for attention.20. girls will ALWAYS make beso to guys regardless of social status [for both parties]21. there’s really nothing wrong with our guys talking to other girls. unless they touch the girl and ask for their numbers and give them the sex look or just talk to a specific person between the whole period of conversing. then you should be scared.22. guys also take time from their lives to stand in front of the mirror and stare at themselves.23. when girls start  inflicting pain or their guys, [playfully] it just means they miss them soo much and that they’re dying to kiss them but can’t [proli cuza the environment]  24. guys baby talk, too!25. some guys actually mean their “i love you’s…”and that’s the BESTEST part of it all.

+ i’ve learned a lot about boys, girls and etc. in the past 3 months. [sheeesh. still 3 months? i thought time flies? HAHA]
and i’m sure i’ll have more to post soon.