will we ever be as happy as we want to?

soo much stuff has happened today. it’s probably like, the craziest day i’ve had in a while and i am soo completely drained from my day, my arms hurt like hell but for some reason, i cannot control myself from wanting to blog about tonight, today and everything that a 17 year old could ever think of at this age. so i’m going to.. help me, god.

so in order to describe today, i have to start at the very beginning.

at around 7 something, chabel, the ever mighty chabel, woke me up. she called to ask me if i was going to CDU, the university i’m planning to go to for college. [it’s also james school. big suprise there.] and i told her yes, she said she’d call back and she went to sleep. fuck her, i couldn’t na. 🙁

so i stayed up and cleaned my room, did good daughter stuff then uploaded do it by nelly furtado on my phone but only because i love the line in the song that goes,

don’t you know how much i love you?
haha.

then at around 9, i left for arden’s place. it’s actually kinda funny how you think a person has changed soo much just to find out that, they never really did.

arden’s the same old crazy bitch that i know and love. and because of today, i love her more. <3

by this time, james was in school with human analogy, learning shit. lol.

it took arden soo long to get ready, it was soo crazy. it took her an hour to bathe, another to get ready and like, 30 minutes just to get a freakin cab. i’m never riding with her to school. never gyud. lmao.

anyways, so yeah, when we were finally done, we went to pick up chabel at her place cuz she wanted to come. see, the plan was, we would eat lunch together with james, carlow and charles and whoever else who was there. i wanted chab to go cuza that. cuz of charles. but then.. things got so fucked up by the time we got there…

so we got there, right?

and you know how it is to be in this place and not know what to do and not know where to go? it was just like that. me, arden and chabel were the innocent, ignorant freshmen [not even pa gani!]. like, idk, we were just 3 very small, scared and helpless little girls. it was so embarassing. cuz people were starring like us like we were their business or something and james was in class so no one could help us and to make matters worse, the guidance office was closed til 1. it was like, 12 pa when we got there. that’s not even the worst part. and i know by blogging this, i’m def. going to remember this and look back and realize just how stupid i am for this guy. this guy named james.

so, we’re at his school na, he’s in class, we know absolutely nothing about the fucking place and then he’s forcing us to go to his classroom just PASS BY. yeah, it sounds easy but it’s not as easy as you think. if guys don’t mind people starring at them, if they even like the attention, then i guess i’ve just realized that we’re different. or it just depends on who you’re with. like, if i was with niña, alexa or angie [only people i can think of..] then yeah, it’d be no problem at all. but unfortunately, i wasn’t. and i told him that we didn’t wanna go because, we’d actually have to go to the third floor and walk by all these classrooms and have people stare at us. and tendency is, someone in that class would know us cuz yeah, they just do. that’s just so uwaw for us.

i didn’t go there to catch attention man gud. if you understand what i mean.

so anyways, chabel was nagging in my ear because james was insulting us, [GOD, HE IS AN ASSHOLE!] and they wanted to leave cuz people were starting to stare at us na gyud but if i left, i knew that i wouldn’t hear the end of it but if i stayed my friends would think i’m the underdog and it sucks, honestly, that i’m not the one wearing the pants in our relationship.

when james wants me- i’m there. when i want him- he’s there pud.
if he can’t – i deal. if he can’t – he shouts at me. and god, i don’t want to be in a relationship like that. it just feels disrespectful and i honestly don’t want people to know me as the girl who gets pushed around by her boyfriend.

i don’t know what my reputation to people was before, i probably didn’t even have one but i don’t care. i don’t see life at my age and think that setting a reputation is the most important thing in the world but if i ever do acquire one, god, i’d wanna be the girl who has fun, the girl who’s good at everything, the one who’s lucky to have a boyfriend. and not the reputation that my friends think of me now. that’s just too humiliating.

but i stayed anyways. my friends left for the mall til 1 and i stayed. i waited outside his classroom a few minutes with monique but i eventually left cuz idk, i just didn’t want to stay cuz he was treating me like shit and i didn’t want to take that. i don’t deserve to be treated the way he treats me sometimes. i DON’T deserve to be humiliated infront of my OWN friends or anyone else for that matter.

i need my dignity back.

i went to the mall after that. then james got out. oh god.then the worst part came. i said something really mean to my bestest friend in the whole world and she got so mad at me. i was crying in the mall. i never cry in the mall. GOD, SHOOT ME! it was just horrible. i was fighting with chab and james was on the phone waiting for me to explain things when in fact, i had nothing to explain in the first place. he was just really being a spoiled son of a bitch who was mad cuz he didn’t get his way. and that’s that.

but honestly? idk. i don’t want to be treated this way but i’m starting to start my own list of reasons why i should or why i would break up with james. not that i’m going to but only so that he’d know how much of an asshole he’s becoming sometimes.

sorry, god. i love him but it just really gets tiring sometimes.

anyways, after a while, me and james fixed things out and then i went back. everything was fine from there. i talked to him and i just made him see my point. i told him how embarassing it is for my friends to think that he can just manipulate me.

but what am i supposed to do? not care? when he calls, am i just not supposed to answer? when he gets too tiring to talk to, am i just going to turn off my phone? what if he did something stupid? is it going to be my fault?

sometimes he just makes me so scared.

like, i just have to watch what he does cuz i need to make sure he doesn’t hurt me.

is it because i don’t trust him?

i don’t trust anyone. remember??

but yeah, we were ok naman. like, i got my test schedule. 1 o clock, december 1.

then we went to ayala. it was ayt there. his friends just followed us around.

maybe i’m just being one sided here noh? cuz like, idk, i’m not talking about all the great stuff he does. like, he makes his friends walk around with us to watch over us while we window shop, he pays for everything, he keeps the stuff i can’t. he watches over me. he takes care of me. does everything i ask him to do. so am i just.. overreacting?

i mean, noone’s perfect. don’t worry, i’ll have my time to make him look like a stupid idiot and then we’ll be even. one day.

ayala was fun then we went to apas with arden and yeah, dinner with the family and it was all really good after.

me and chab are fine and idk, i’m just ok. me and james didn’t fight at all after this afternoon. it was actually the first time we went to ayala where we weren’t fighting. happiest we’ve ever been together in public. lol.

i guess you can never have a perfect day, noh? just parts of it lang. but i’ll settle for that.

when we got home, my parents tried with all their might to convince me into not going to the university that james’s at. well, i don’t blame them. everyone knows that place is full of social climbers and shit. but i talked to micah and she said it’s kind of like a challenge. it depends if you crack. well, i don’t intend to.

i didn’t tell my parents about me taking the test to i academy. i didn’t even tell them about me passing. i really just can’t, you know? and honestly, there’s just no point in it anyways.

i should just get that dream of mine out of my head. 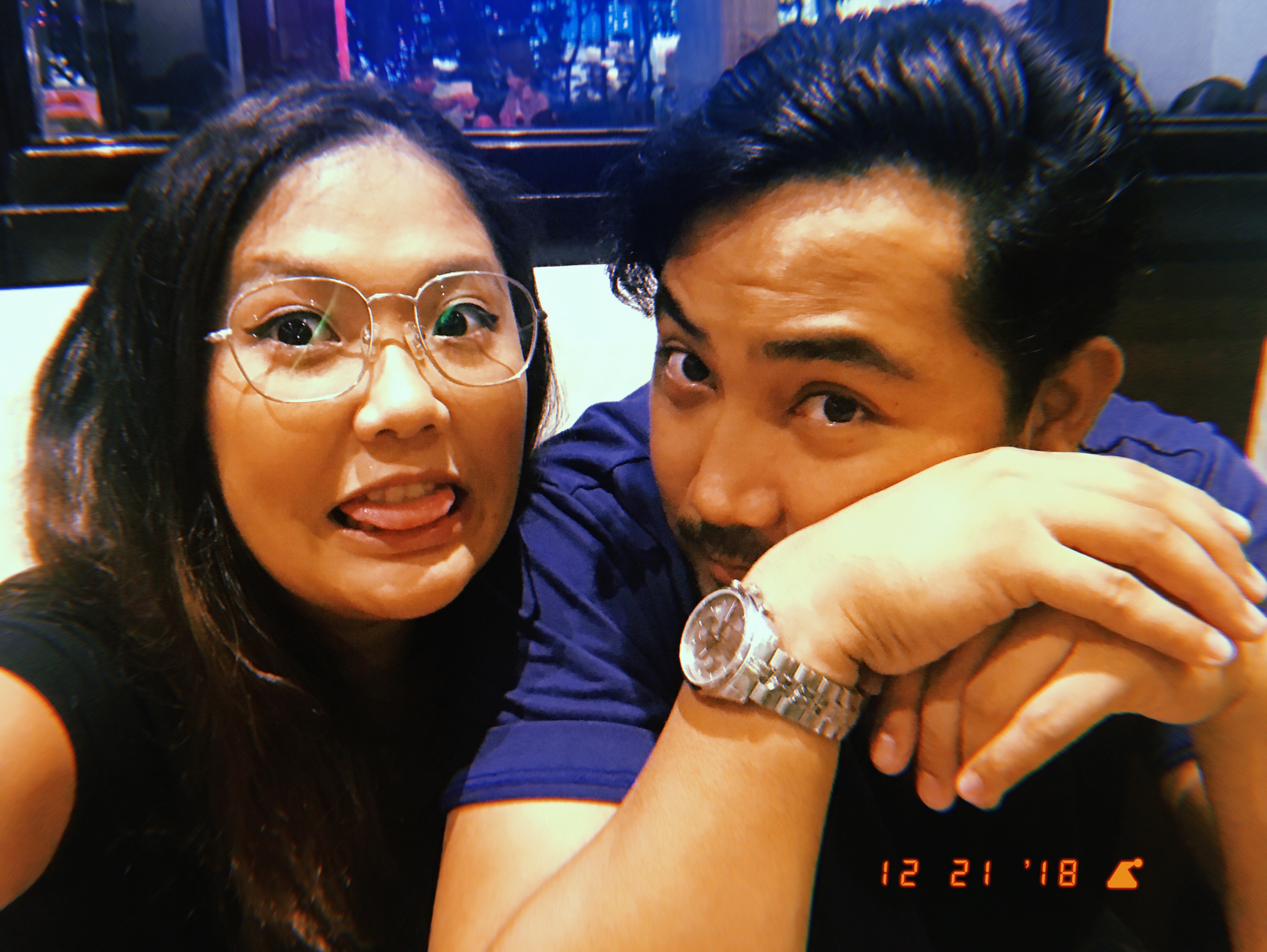 I’ve Been Answering The Same Survery for 13 Years